Mumbai: Robots adoption in various industries to automate processes has already led to higher efficiency, reduced complexity, human errors and enhanced safety of workers. The impact will further grow over time to transform human lives and work practices, according to the data and analytics company GlobalData.

In the developed world, robots are increasingly seen as a solution to many of the structural problems such as sagging productivity, aging populations, swelling healthcare budgets, and even epidemics of depression in an increasingly fragmented society. In developing countries, where labor costs are low usually, the use of robots is becoming popular in tasks that are difficult and endangering to the workforce.

An analysis of GlobalData’s Disruptor Tech Database reveals the growing demand for automation and rapid boom in industrialization, lack of skilled workers, exorbitant labor costs and the emergence of sophisticated technology as some of the key drivers behind the accelerating adoption of robots.

In pharma, the oral delivery of large drug molecules remained elusive until the recent advent of robotic pill that has the potential to replace painful drug injections. Silicon Valley startup Rani Therapeutics developed ‘Auto-Pill’, a breakthrough robotic pill capable of delivering biologics, peptides and antibodies into desired areas of human body without causing any pain. 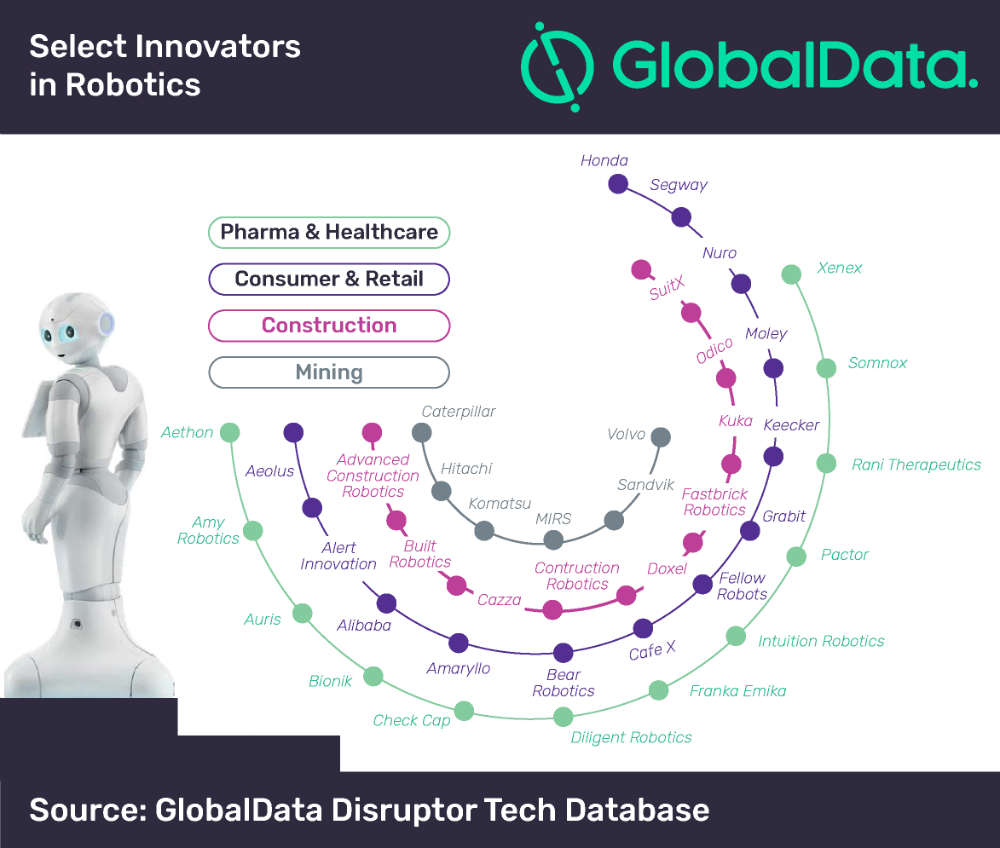 The value proposition of robots stands high to automate multiple activities in mining, from the extraction and transportation of materials through monitoring and control of the worksite. Various types of autonomous haulage systems are commercially available today (Komatsu’s for instance) that demonstrate not only higher productivity and improved efficiency, but also enhanced safety and reduced number of safety incidents.

With no major role of robots in a building’s lifecycle, construction is one of the least automated industries. The scene is all set to change and the industry is expected to witness a robotic revolution for enhanced productivity and lower costs. Australia’s Fastbrick Robotics developed a fully autonomous brick-laying robot Hadrian X, which is capable of laying 1,000 bricks on an hourly basis equivalent to daily output of two human bricklayers.

“As the role of robotics grows, enterprises could confront a series of issues, including those where they do not have the knowledge or the resources to buy and maintain them, growing uneasiness among trade unions, governments and regulators. The inherent fear that robots could displace workers could lower morale and create conflict within. Other risks such as compliance, protecting intellectual property and accountability need to be carefully assessed by enterprises before adopting them,” concluded Dasgupta.